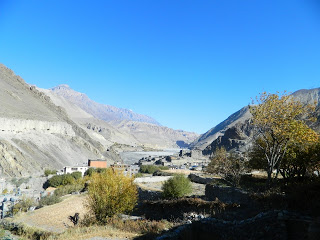 This is truly the edge of the world.  I know I have written those words before, but I never felt them so avidly to be true as I did on Tuesday morning, my first day in Mustang, Nepal.  The bus from Jomosom (elevation 2720m) to Kagbeni (2850m) rounded a bend in what my map calls a “jeepable gravel road” and  I caught my first full view of one of the most spectacularly empty landscapes I have ever seen.  None of the passengers (mostly pilgrims bound for the holy temple at Muktinath, several hours and a thousand meters farther) seemed the least bit concerned when our “road” passed directly through rivers and careened over small boulders.  I too have become accustomed to this specialty of road travel in Nepal.  My ten new Nepali friends, young business-owners from the south of the country also heading to Muktinath, sang along boisterously to the Nepali folk pop playing from the speakers.  We had stayed up late the night before drinking apple bandy (a Mustang specialty) and talking about “our culture” (as difficult to define in Nepal as it is in the U.S.).  The ticket-taker, whose three-day-old beard gave him a more rugged appearance than the average, never lifted his gaze from the open door and the rising dust beyond it.
At the junction to Muktinath, I alighted, shook hands with my friends, said goodbye, and turned to take in my new home.  Kagbeni’s ancient stone buildings, testament to the important place the town once held along the salt trade routes from India to Tibet, apple trees, and new solar panels lay beneath me, the Kali Gandaki River, quite low now in the dry season, winding alongside.  Beyond, in every direction, stretched golden mountains, cliffs and canyons— nothing but rock and dust and thorny shrubs invisible to my naked eye.  Beyond that, gray and white snow peaks and an unblemished turquoise sky.  The wind blew dust into my hair and face.  Exhilarated, awed, and entirely alone, I felt like laughing aloud. 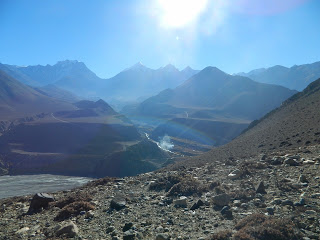 The journey from Kathmandu to Kagbeni took three days.  I traveled the first day from Kathmandu to Pokhara (810m), an 8 hour bus ride, which was dwarfed by the three buses I took the next day to Jomosom, rattling and dusty the whole 12 hours.  Finally, around 9:30 a.m. on day three, the journey I thought would never end—wearisome and devoid of any glamor—deposited me ten minutes above Kagbeni.  Alone, looking out at a village that might have been entirely forgotten if not for its placement along the Annapurna Circuit trek, I felt completely in my element in this wild land at the edge of the world.
~
I’m picking up some very strange speech patterns these days, a byproduct of never speaking English with native speakers.  My Nepali-lish is getting excellent use—I managed a twenty minute conversation the other day! Long pauses accounted for about half of it, I think.  I will be in Kagbeni for another ten days or so, doing research on tourism, tourists, ethnic identity, etc. If you want to know more about that side of things ask me about it… I could go on for a while, but I won’t here.
adventureAsiasnapshotstransporttravel