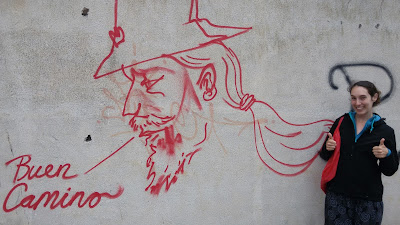 Pilgrimage Museum, Santiago de Compostela, Galicia, Spain
I placed the noise canceling headphones over my ears, and an ancient melody flowed straight to my soul.
It was my foodsteps—hundreds, thousands of them—plucked from a harp. It was the daily rhythm of walking made song.
I stood at that display in the Pilgrimage Museum for a long time, and I listened to some of the recordings of the Resonet Musica Antiga group more than once. Recreated from sheets music in the Cathedral’s archives and reconstructed medieval instruments, the music might have run through my head at a distance.
But somehow it didn’t. Somehow it connected.
I arrived in Santiago on Friday, July 1, 2016. That Friday marked the culmination of a month of walking across Northern Spain (approximately 800 kilometers) begun in the vague interest of “seeking.”
(We can talk about what I “found” once I figure that out—story for another day.)
Pilgrimage is an ancient phenomenon. Historians have found evidence of its occurrence in Mesopotamia, Vedic India and ancient Egypt. Wherever it appears in human history, it follows the same principle: an outward, often arduous journey serving as an allegory for the spiritual path.
Since the alleged discovery of the remains of Saint James (one of the Twelve Apostles) in the ninth century, Santiago—and its cathedral—has been one of the most important pilgrimage sites in the world. It is said that the Camino de Santiago—the Way to Santiago, and there are many—is a metaphor for the trail marked by the Milky Way across the sky. Again, a physical manifestation of a metaphysical path.
That sounds heady and outmoded, right?
Wrong.
In the last decade, traffic on the Camino Frances (the most popular route) has surged into the thousands. Clearly, the ancient tradition still resonates. And lately, its popularity is growing fast.
Just as ritual will always revive itself and traditions will be reborn, pilgrimage is finding its place in the modern world.
The scallop shell, long worn as an insignia by peregrinos walking to Santiago, now hangs from my backpack, too. Symbol of water, life and healing, it is as timeless, endlessly resonant, as it is timeworn.
These themes are eternal:

As I listened to those modern recordings of centuries-old music, I heard my experience translated—so precisely—into sound. I walked a path that thousands, perhaps millions, had walked before me, and though the asphalt beneath my feet and electric lights in the distance were new, the the experience had somehow been the same. [2]
That, in short, is why pilgrimage is still deeply relevant today.
***
[1] The Warrior, The Seeker and The Scholar are the three archetypes represented by Saint James.
[2] Sadly I have not been able to find the same recordings anywhere online. This is the closest I could find, but you may have to visit the Pilgrimage Museum in Santiago to hear the music I’ve described:
***
About
adventurecamino de santiagocultureeuropeseekslow travelspainspiritualitywalking