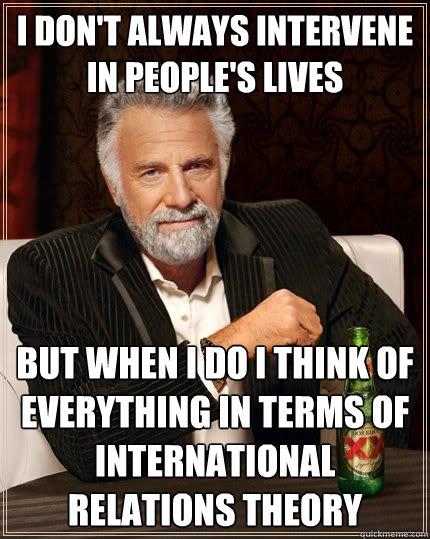 [Our] accomplishments do not make the Western paradigm exceptional or suggest in any way that it has or ought to have a monopoly on the path to the future. — Wade Davis, Wayfinders

After a challenging three weeks in an International Relations course, I realized something…

Wait. Let me rewind first. Three wekes ago, I wrote:

Anthropologist Wade Davis—and particularly his book on indigenous systems, quoted above—has left a deep impression on me in the past year.

He expresses, with compelling eloquence and abundant case studies, my own feelings about our modern status quo. In these first few weeks at UPeace, I have seen the Western paradigm for peacebuilding and conflict resolution repeatedly touted in assigned readings as the apex of human thought, with few voices raised in opposition. (Makau Mutua comes to mind.)

While traveling over the last three years, I have encountered countless well-intentioned people doing far less good than they had hoped.

I believe it comes down to arrogance.

The problem is that we think we know everything. We think our truth is the only truth—that our reality is Reality. We are self-centered enough to believe human development is linear (and concentrated in the “West”) and that anything that came before, or from outside, is irrelevant to our future as a species.

This narcissism holds repercussions far wider than the field of peace and conflict studies. It impacts economic systems, food production, development, immigration policy, and so much more. Even worse, it closes our minds to all the wisdom available to us within our own history, and it stunts our capacity for creative and critical thought.

Human innovation is limitless, but only if we are humble enough to apply it to the flaws in our own paradigm.

As a storyteller, I am most interested in the role individuals play—as agents of change, or as champions of a flawed system. It is individual arrogance that calls America the “Greatest Country on Earth” and believes it devoutly. It is individual arrogance that can watch a system of production far outpace the earth’s capacity for regeneration and call that progress. And it is human arrogance that promotes the universalization of broken structures in the name of peace, employing many kinds of violence to achieve it. I believe real progress will come from empowering individuals to think critically and tell new stories about peace.

This is why I’m drawn to movements like social permaculture, rewilding, and experiential learning. These proceed with humility and open minds, don’t assume they have all the answers, and look beyond a human-centered, modern Western paradigm for solutions.

I do not believe there is anything idealistic about such an approach; given the circumstances, it might be the most pragmatic yet.

You see, I wrote the above words from the perspective of a writer, a student of anthropology, and a poet with an enduring interest in indigenous wisdom. The readings in my recent course, on the other hand, offered answers mostly rooted in the rigid and ethnocentric tradition of International Relations.

In our final assignment, we were asked to, “Cite the theoretical frameworks and readings that have most influenced your thinking.”

Instead, I decided to be honest—and not to simply put words on the page for the sake of a grade.

I had to admit that those theories and readings had not influenced my thinking—not in a meaningful way.

They made me question the utility of any political system at all. They made me seriously consider becoming an anarchist. And they have made me wonder if perhaps my incorrigible optimism is not so well-founded.

With the utmost respect to the field of International Relations and those dedicated to it, I am not at the University for Peace to learn about Neorealists and Neoliberals.

I do not care about great powers, nor small ones.

I do not care if China will be the next hegemon, not really.

I do not care if my worldview would be classified as “Cosmopolitan” or “Neorealist.”

I believe in the potential for transformation at the micro level, and I direct all of my efforts in my work—in writing, facilitating, editing, and learning—toward that end. I believe that the actions and choices of individuals and communities have an increasingly global impact.

I believe in the exceptional power of media to inspire, accelerate, and sustain that transformation. International Relations speaks of hybrid warfare. Perhaps we could also speak of hybrid media: Individual “influencers” with audiences numbering in the millions. Online forums that subvert the status quo and utilize new blockchain technology to circumvent established channels of communication (and power) entirely. Anonymous “actors” who sway the tide of public opinion.

A single policy change may touch millions of lives (for better or worse), but so can a single viral article.

So, what do we do with that power? I am refining my answer to that question day by day. This new media is a masterless force, and I hope I can have a tiny, tiny role in directing its course—by adding my own voice to the multitudes and advocating for tolerance, understanding, equality, love, and curiosity, and by supporting individuals to find their voices and harness their experience for positive change.

It is critical that we see things as they are if we wish to shape them to a vision of how they could be—absolutely. Frameworks and theories are useful tools for organizing practice, innovating solutions. Yet, as Einstein (or, it may have been Mark Twain) famously said, “Insanity is doing the same thing over and over again and expecting different results.”

From where I sit, even new theories look suspiciously similar to old ones. Human-centric. Stubbornly rooted in a Western paradigm. Of limited relevance to the average human being.

The extraordinary young entrepreneurs I met in South Africa, in Kenya, in Zanzibar do not need our theories. Are they not already doing more than any of us to promote peace in their communities? The writers I have worked with for years, supporting them to share stories of trauma, of sexual abuse, of mental disorder, may or may not agree with Kant’s theories on peace, but they are practicing peace—and inspiring others to do the same.

The yoga students in my classes do not need theories of transformation to transform.

The lesson is in the practice.

None of this is to discount the value of large-scale institutions, nor the power of structural change. Indeed, transformation must occur at all levels—for instance, nations signing onto the Paris Agreement; big business investing in corporate responsibility; entrepreneurs pursuing eco-restorative initiatives and non-traditional models of growth; and individuals committing to drastic changes in lifestyle.

But while the knowledge I have gained in the past three weeks is undoubtedly valuable as such, my work is not there at the level of state actors and UN resolutions.

My work is not theoretical—or, I do not want it to be.

I find it impossible to understand how my actions, here at the most micro of levels, have any bearing on these expansive theories.

There are seven billion of us here on the planet, and more on the way. There is no shortage of shoes to fill.

Adapted from a (perhaps overly honest) final reflection paper for my recent course at UPEACE.