How to Pour Tea, It’s Out of our Hands, and Other Lessons from the Moroccan Coast 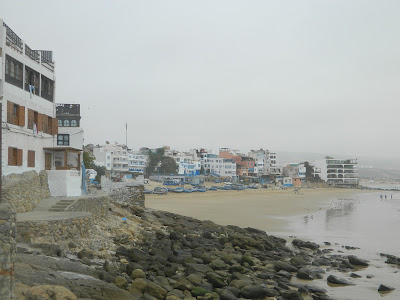 View of Taghazout from one of my favorite cafes.

We watch the waves crash against the cliffs beneath our table, the spray catching the sunlight over and over again.

Our tea arrives—the classic combination of Moroccan mint and strong green that everyone drinks, but without the usual pound of sugar, per my request. A simple silver teapot with a long spout. Two small glasses (not mugs, but glasses).

I lift the teapot and pour, starting low, then lifting higher, and higher, and a bit higher, steam rising up from the cascade of tea and a slight froth forming at the top of each glass.

(If I wanted to mix in sugar, I would pour out glasses of tea and dump them back in the pot several times to avoid using a spoon—bad luck, I learned later. But I don’t, so I only pour once.)

I can’t remember where I first learned to pour tea—properly. I think it was in a Senegalese village when I was 16. Everyone laughed at my first attempts, of course. Even today I spill more than any veteran tea pourer ever would. But I know the technique, and I can make a few bubbles.

It’s a small thing, arguably, pouring tea well, and yet drinking tea proves such a fundamental aspect of so many cultures that I think it’s important, too. Worth learning. Worth sharing.

You should open a cafe there—you would get so much business!

Are you moving this week?Inshallah.

When does the high season start?

Things will get busy next week—inshallah.

Inshallah (also written insha’Allah). If God wills it. God willing. Used throughout the Arabic-speaking and Muslim world—and often. At times my plan-making mind gets irritated by the ceaseless string of Inshallahs spoken and exchanged each day.

Well, no, it’s not—is it? To visitors from outside cultures, I think this nonstop Inshallah business can seem like a cop out. Noncommittal. But I suspect (I don’t know nearly enough to say for certain) that it stems more from a different perspective.

Everything—everything—is out of our hands. Maybe. It’s probably a good brain exercise to consider the possibility, even if you disagree. Living here, then, is like a daily mind workout.

Every day I learn here.

I learned that until the 1950s there was a small Jewish settlement alongside the Berber ones in the mountains behind Taghazout. I visited a new friend’s home in those mountains, and I could feel the history in the ground under my feet.

I learned that Friday is couscous day and that soup is a summer food.

I learned that no length of fabric will cover my foreignness here—no matter how Mediterranean I like to think I look.

I’ve learned that if you sit long enough in one spot it is really possible to see every person you know in this town, and that if you start walking you can spend a whole day just stopping in for chats with old and new friends.

I’ve learned how to roll under a wave with my surfboard, and that lip sunburn is real.

I’ve learned to count to ten (though I’ve forgotten at the moment), and how to greet.

There’s no other message today. There are lessons everywhere, every day and in every culture; I hope you’ll go find some!