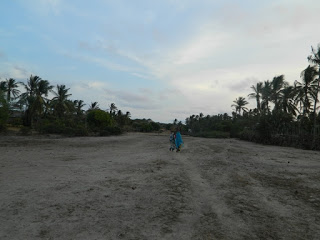 I never knew there were so many ways of wearing a head scarf, but after more than a month in Zanzibar–people watching on dala dalas (public buses), at the beach and in Stone Town–I think I may have seen all of them.

There is nothing birdlike about the women I see walking along the beach, jewel-bright against the stark white sand. Though their scarves flutter prettily in the wind, their arms are strong, supporting baskets on their heads, and their steps are deliberate–heavy, even.

Some women wrap their heads in lengths of pattered fabric, leaving their faces and necks bare. Others dress in heavy black coverings that melt seamlessly into the fabric of their dresses. Some layer a heavy white and all-concealing cloth beneath a lighter outer piece.  Still others throw on a scarf as an afterthought, tossing one end over their shoulders as they usher their children outside or duck into the dukha (store) on the corner. For those particularly fashionable, and presumably wealthy, women, the scarf is a statement of personal style, wrapped asymmetrically or held with studied carelessness just below the hairline.

Girls in their school uniforms, heads covered with long, plain pieces of white or gray fabric, walk in flocks of three to ten through the narrow stone alleys of their neighborhoods. Their rounded heads, demurely framed faces and tented apparel appear, to my mind, unmistakably reminiscent of the nuns I have seen in the streets of Rome.

In Italy, however, those nuns are occasional (and for me, always remarkable) apparitions; whereas here, hundreds of such girls travel to and from school each day. Commonplace they may be, but something about them always strikes a chord in my imagination.

Then there are the women who drape brightly colored, patterned scarves over hair piled high atop their heads. While sitting on the bus, I often find my attention fixed by a large, jeweled pin holding the entire construction in place for a woman beside me. Some tie a black piece of fabric over these scarves and across their faces, leaving only a narrow opening for their eyes. Tall and slender, jeweled and wrapped in silk, these women sharply remind me of the princesses of old storybooks.

The impression is hard to shake. There is an old-world glamour made modern–to my eyes, at least. Coming from a place where head scarves are extremely rare (except for in my hardback copy of One Thousand and One Nights) I see shadows of a fabled past.

In reality, though, I have simply entered a different paradigm–one where my uncovered head is the only anomaly, and where my limited knowledge of foreign fashions is baldly apparent.

There is a stunning amount of diversity contained in this small, religiously homogeneous island. I hope my record of variety might serve to reveal the gaps in others’ understanding, as it has revealed mine.