“Don’t go to Morocco Alone.” And other Fear-mongering you should Ignore. 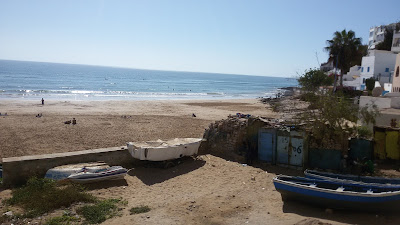 A rooftop terrace in Taghazout, Morocco.

Me: “I’m thinking of going to Morocco.”

As you may have guessed, I didn’t listen to everyone, and here I am: in Morocco, very much solo, and so far quite pleased about it.

(For the next month, I’ll be living in Taghazout, a small town on the Atlantic coast, teaching some yoga, learning the fine art of surf bummery, and generally winding down after an overly hectic few months. And I’ll have time to visit a few Moroccan cities afterward, not to worry!)

There is a saying here, which a new friend taught me:

One rotten fish can make the whole bucket stink.

For those who work in the tourism industry, that rotten fish (in the form of robberies, political unrest or an isolated attack) is the proverbial boogeyman. Just a whiff of danger and foreigners will cancel their flights. An act of terror (as occurred while I was living in Kenya)? Total disaster for the industry—and, by extension, a great many people’s livelihoods.

I digress somewhat. I don’t to tell you what happens to the tourism industry when the fear-mongers win. I want to tell you why you shouldn’t listen to them in the first place.

Every country- or city-shaped bucket has a rotten fish—often many.

In my opinion, those rotten fish are the reason why people will tell women not to travel solo to India, Zanzibar, Turkey, fill-in-the-blank-with-your-country-of-choice. “It’s not safe.” “Men don’t respect women there.” “It won’t be pleasant.” Et cetera, et cetera, et cetera.

And sure, there’s a good chance I will encounter an asshole or two before I leave Morocco in six months’ time. I’ve spent time alone in all of the aforementioned countries, and I’ve had occasional negative experiences in all of them (though always far outweighed by the positive). But do you know where I’ve encountered the most assholes? On college campuses in the U.S. In Parisian metro stations. Walking down the street in Boston.

So what can we learn here?

Well, for starters, check your assumptions. Are you giving more credence to warnings of danger or disrespect because the destination in question is “over there”? Keep in mind that nowhere is perfect, and nowhere is particularly “safe.” I have yet to investigate, but I’ve heard Morocco may be one of the statistically safest countries in the world. Chew on that.

Second, ask yourself if you’re discounting cultural differences. If so, you may be falling victim to the understandable yet problematic epidemic of Western ethnocentrism. That is, judging another culture purely by your own values. Quick tips for women wishing to avoid harassment while traveling alone: cover your hair, cover your shoulders, and cover your legs (generally, follow cultural codes for modesty and behavior). Oh yes, that’s problematic in its own way, and I take issue with it sometimes, but we don’t get to make the rules when we visit someone else’s home.

Lastly, choose your devil, because there is nowhere—nowhere–you will be utterly and inalterably at ease.

I (and just about every woman ever) learned since birth to fear. Fear attack. Fear violence. Fear bad men. Fear everything, right? Society teaches us that.

And it’s true. Of course it’s true! The world is a scary place. Especially for women. We’re working on it, but we have a very, very long way to go. Change, however, has never happened when we stick to the status quo. Fear-mongering doesn’t keep us safe; it keeps us the same. So if you want something different, you have to ignore the fear-mongers.

There’s a lot of space between reckless risk-taking and bubble-girl-style caution. Here’s what you may find there:

> Deserted tropical islands where you can run naked across miles of sand, because you are totally, beautifully alone.

> Kind shop owners who will invite you inside for tea, show you pictures of their wife and children, and invite you to stay with their family if ever you return to their country.

> Fascinating strangers on trains, buses and trails, in hostels, campsites and smoke-filled restaurants, whom you never would have met if you hadn’t been traveling solo.

> The best meal of your month, discovered only by following your nose and your intuition (yours alone) through a labyrinthine bazaar.

> And last, but unavoidably, rotten fish. It’s part of the travel bucket. But hey, it’s part of every bucket, and you can’t avoid them all.

I hope, if nothing else, this will make you think—maybe reconsider. Please share your thoughts in the comments if so inclined!