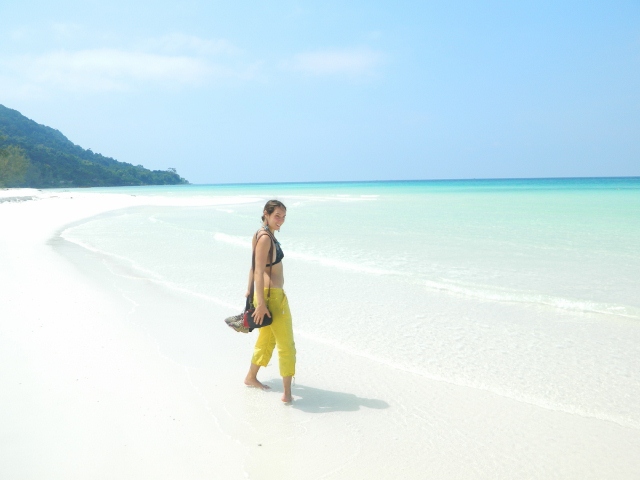 Somehow two months have managed to sneak by me since I last posted anything.

In that time I have tried every tropical fruit available in Sri Lanka, spent a night with my family on a houseboat in Kerala, celebrated Christmas Eve with a very drunken Keralan Santa Claus, celebrated New Year’s Eve with my big brother in Varkala, completed an intensive yoga teacher training in Goa, learned about energy healing, overstayed my Indian visa, traveled 40 hours by train from Goa to Calcutta to get an exit visa, sat on the stoop of a man named Asheef and listened to his life story, eaten every kind of street food, sampled scorpions in Bangkok, learned how to make curry paste, biked 70 kilometers to a waterfall in Laos, kayaked from one city to the next, explored a massive cave, avoided abduction by tuk tuk, gotten sick, gotten better, rushed, relaxed, walked, danced and wandered.

Whew! The longer I’ve put off catching up, the more daunting the task has become. Since I couldn’t hope to fill in all the gaps, I will call that caught and move on to a topic that has long occupied my thoughts, especially in the last couple weeks…

Ah, aimless wandering! Some would denigrate you, belittle and besmirch your name, but I would like to come to your defense. Each day, I wake up with no set plan, no idea where I will be tomorrow, and no worries. Each day stretches out before me in an infinite rainbow array of possibility, so bright that the future beyond resembles Sri Lankan hill country, where thick gray fog conceals green valleys of unknown depth.

In moments of doubt I worry that this traveler’s lifestyle I have chosen to adopt for a few months might be frivolous, or that others may judge it so. But then I remind myself: I spend each day from sunrise ‘til well after dark with my eyes, mind and heart wide open—how many people can truly say that? Each day is dedicated to the new, consecrated by the unknown and celebrated by the joy of movement.

If life is what happens when you’re busy making other plans (thanks, Jack), then maybe, just maybe, it is only without direction that we can truly live.

I suspect I may seem to be glorifying an ambitionless, idle existence, writing a slacker’s manifesto as it were. Not so. If plans are the sticky rice of life, then flexibility and spontaneity are the hot red curry that makes that rice not only edible, but beautiful.  I would make the distinction between life without destination and life without intention—the former can manifest in aimless wandering, while the latter results in meaningless grasping.

It is when we wander with purpose that we become frustrated, lost in the twists and curves of an unfamiliar city, unable to arrive at our destination.  But when aimless, without direction, wandering realizes its full potential, and we find suddenly, on arriving, where we were heading all along.  The best swimming holes, cafes, temples, parks and people are not to be found, let alone enjoyed, in a hurry.

To wander aimlessly takes courage, to defy society’s demands for plans and commitments; confidence, to stand by a pursuit that on the surface has minimal value; and perhaps a wisp of insanity and a shred of common sense, to know when to keep going, and when to stop, respectively.  In small doses it can cure most ills, and in large ones it is a lethal injection to normal life.  I defend it wholeheartedly but within reason.

To you, aimless wandering, without whom every journey would be routine.